When I was a child I used to have this odd … not fantasy … belief? … that I was adopted. (Or maybe actually an android. Or maybe a dragon. You get the point.) 8 year old me can rest easy knowing that my dad is definitely my dad and my mother is definitely my mother. (And I am definitely human.)

As I thought, my dad’s DNA results from Ancestry were delivered about a week after my mum’s.

The least surprising aspect is that my dad comes out as 99% European. It’d be strange if he wasn’t, quite frankly. However, what is striking is the breakdown of the regions within Europe that make up that 99% – and, in fact, what makes up that additional 1%. 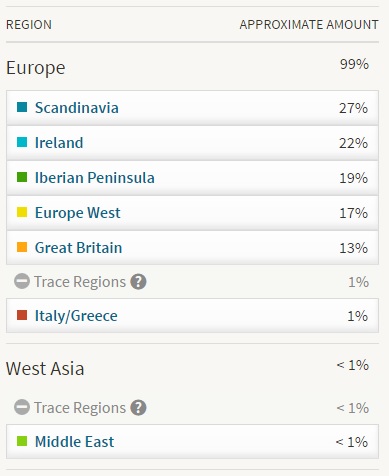 The largest percentage – although not by much – is Scandinavia. When you picture Scandinavian men they tend to be, well, tall and blond. Frankly, in nobody’s view is my dad either of those things. I’ve also not come across any Scandinavian ancestry so far in my research.

Ireland and Iberia both make up about a fifth each. Ireland I could maybe see coming through various American lines, and I have a suspicion that the Murray/Moray line actually comes from Ireland (mainly based on nothing more than a Catholic link and only being able to trace them back 200 years to the south cost of Dorset). Iberia? Not a clue. Although perhaps it explains the dark, curly hair …?

The fact that Western Europe scores higher than Great Britain was definitely a surprise. Perhaps through the various immigrants to America? But my paternal grandmother’s family all seem to be from Wiltshire. Which would account for the 13% score – but I’d have expected that to be much higher.

Italy/Greece comes up as a trace region. As does the final 1%: The Middle East.

All of this is mapped out below: 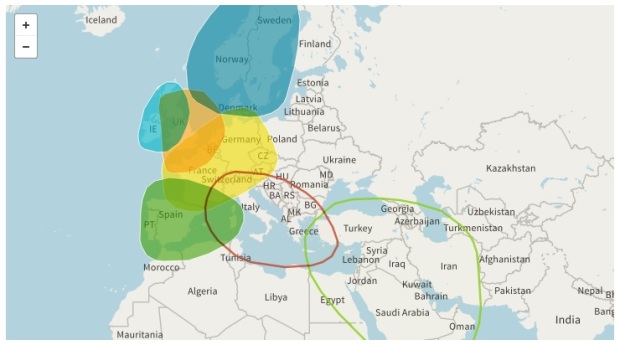 I’m somewhat baffled, to be honest. It’s going to take a whole heap of further exploration to explain some of those percentages and regions!

I’ve also cross-referenced the named regions for the 3 tests. How the regions have filtered down to me from my parents is … well, it’s random. That’s the whole thing with DNA and the way the gametes come together and share their relevant information to make, well, you and me.

And I suppose it’s also down to random generation that my Scandinavian score is so low overall despite my father’s higher percentage, or that my Iberian one is relatively high compared to my mother’s low score.

I suppose that were I to get my brothers tested then the results would be similar but different (you know, random interchange of biological information). But as I’m not about to fork out £240 for the 3 of them to do the test then I guess it’ll have to wait!

I also think that it’d be interesting if some of my father’s other family were tested (although he has no full-blood siblings, he does have a number of half-siblings – one on his mother’s side, two on his father’s side, and I have a host of cousins in the UK and the USA). Not that I’m hinting. At all. In any way. Ahem.

Seriously though, the DNA has taken me on an amazing journey already, and the more I study the results and what they mean – as well as Ancestry throwing up more matches – then the more I’ll understand the relevance of each piece of the genetic puzzle that has been put together to end up with me.

Kind of makes you wonder, doesn’t it? What’s lurking in your DNA?

Sharing ancestors, one person at a time. Genealogy and history.