As previously mentioned, my own grandmother wasn’t able to join her husband in America following WWII. However, Eva wasn’t the only member of my mother’s family to succumb to the charms of an American GI.

Where exactly Barbara met her husband-to-be isn’t known at this time, but it would be easy to assume that he was barracked at Le Marchent in Devizes, Wiltshire.

In December 1945 US Congress passed the War Brides Act. This  allowed the non-Asian spouses (the race restriction was not lifted until 1952), natural children, and adopted children of United States military personnel to enter the U.S. after WWII. It also promised that their wives and babies would be delivered to their doorsteps free of charge. A military movement which was dubbed Operation War Bride started a few months later, and the first batch of 455 brides and 132 children arrived in New York in February 1946. Its estimated that around 70,000 British women left England to follow their husbands.

The War Brides were gathered from around the country and were taken to:

… a military base used as a bride-processing center in Tidworth, in southern England. The women lived in barracks and took meals served by German prisoners of war in the mess hall.

I don’t know if Barbara traveled to Tidworth to be ‘processed’, as she lived close by. 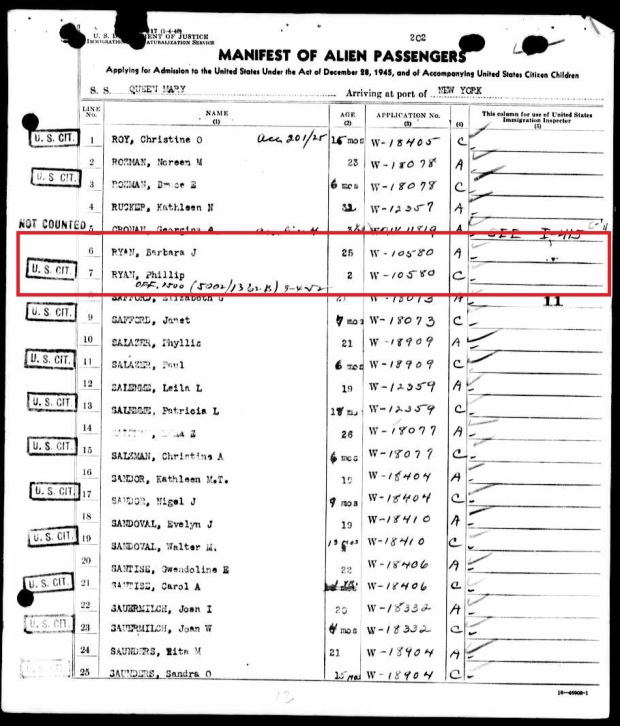 What I do know is that on 31 March 1946 she left Southampton bound for New York. She and her son Philip were travelling aboard the RMS Queen Mary. They arrived in New York on 4 April 1946.

I have no details on Emmet’s army service, or of their life after the war. In the 1940 census he is listed as a plasterer. They did go on to have a set of twin boys, and remained living in Syracuse, New York, where Emmet had been born and raised.

I was able to share a few letters with Barbara (or Joan, as she was known) before she passed away in 2011. She had been a widow for over 30 years following Emmet’s death in 1978. Unfortunately we were not able to share any details regarding her meeting Emmet or her early years in America.

Hopefully, in time, I can reconnect with her family and find out more details!

Sharing ancestors, one person at a time. Genealogy and history