My previous post introduced the Halliday family via my 4 x great-grandmother, Ann Halliday. She was the oldest child – and only daughter – of John Halliday and his wife Elizabeth Angell. After marrying in Sherston Magna, Wiltshire on 12 October 1815, John and Elizabeth would have a total of four children.

Whilst many families ‘lost’ children to emigration, all 3 of John’s sons left their lives as agricultural labourers in Gloucestershire to make their way in Australia.

The first to make the journey were the younger two brothers – John and Thomas – on the Duke of Wellington, which departed from Deptford on 4 July 1849 and arrived at Port Adelaide on 7 November.

John married Martha Williams – who he knew back in “the home country” – in October 1850. After an eventful life that included striking gold in Bendigo and Eaglehawk, and starting the first market garden in South Australia, John passed away in August 1919, aged 91. Martha would follow in November 1923. 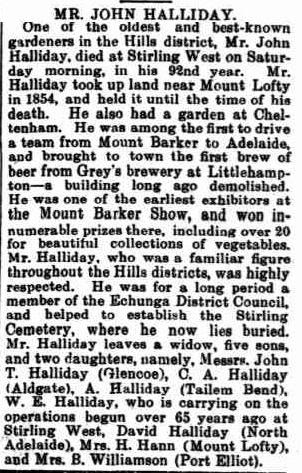 Thomas had a somewhat shorter life in Australia. He was married on 25 July 1863 to Ann Halliday nee Sherwood, and the two of them went on to have two daughters – Emily and Ann – with Ann dying in infancy. (Emily would go on to marry her cousin William Francis Halliday, son of James and Hester.) The family moved from Woodville to the Adelaide Hills where Thomas was a gardener at Biggs Flat, as well as a woodcarter. According to a report in the The Mount Barker Courier and Onkaparinga and Gumeracha Advertiser on Friday 6 May 1881, Thomas was found dead in the road to Echunga on the morning of 1 May 1881 by a drover. The inquest, held at the Aldgate Pump Hotel on the same day, heard from various people regarding the incident. The landlord of the hotel stated that Thomas had been intoxicated the previous evening and that he was often seen “under the influence of drink”. A fellow gardener at Biggs Flat similarly attested to Thomas liking a drink. John, Thomas’ brother, also said the same.

The final verdict of the jury was: “That deceased met his death by concussion of the brain, caused by a fall from his dray while under the influence of drink”.

Ann herself is a bit of a conundrum. She was probably born in Owlpen, Gloucestershire in 1838. A woman by the name of Ann Sherwood marries a George Halliday in the Tetbury district of Gloucestershire in the first half of 1856. It is my assumption (and I have no proof as yet, but some strong supposition!) that this George Halliday is, in fact, George Marsh Halliday, illegitimate son of Ann Halliday and George Marsh – and half-brother to my 3 x great-grandfather Thomas Halliday Hurcombe. Two children are registered in Adelaide in 1859 and 1862 (Loveday Henry Halliday and Albert Halliday) with the parents of George Halliday and Ann Shorwood. I can’t find a passenger listing for George and Ann between 1856 and 1859. Some sources believe that she is the same Ann Sherwood that is listed in 1854 onboard the Time and Truth – but this seems unlikely given that this Ann gives her place of residence as Ireland and her age is out by approximately 3 years, and marries Thomas as Ann Halliday, not Ann Sherwood.

George disappears from the records at this time, and Ann reappears when she marries Thomas in 1863. She is listed as deceased in a newspaper article from the time of Thomas’ death, but no mention of their surviving daughter. Then an Annie Halliday marries William Allen Waples on 21 February 1880 in Adelaide. She died 26 August 1880 from peritonitis rupture – presumably following the accident alluded to in the 1881 article.

Article regarding Thomas’ death, taken from The Mount Barker Courier and Onkaparinga and Gumeracha Advertiser, Friday 6 May 1881

In 1856 the eldest brother, James, his wife Hester (aka Esther), their 6 children and an 11 year old Elizabeth Cottle (possibly a niece of either James or Hester) left for Australia from Plymouth  aboard the Hooghly, and reached Port Adelaide on 25 July.  During the crossing Hester had given birth to a daughter, Elizabeth. Oddly, the ships list of the time lists the baby as male. James and Hester would have 11 children in total, including the William Francis who married his cousin Emily. Two of William’s children – Charles Edward and Maurice Roy – would go on to marry two of their cousins – Annie Myrtle Halliday and Elva Joyce Halliday – who were both children of Albert Halliday, the son of Ann Sherwood and George Halliday.

Somewhat of a tangled web woven by the members of the immediate Halliday clan in Australia!

Sharing ancestors, one person at a time. Genealogy and history.